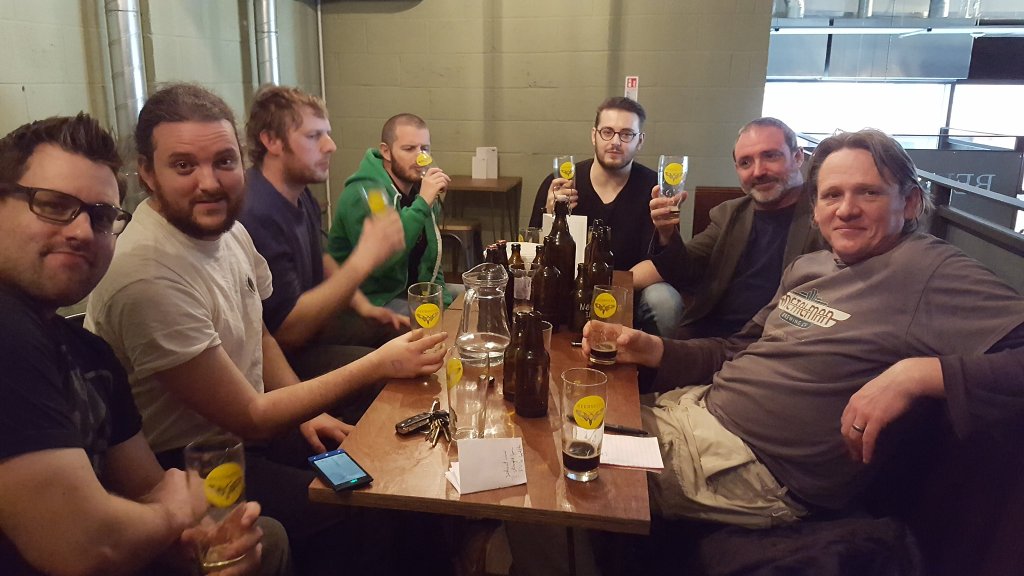 This month we were at @CafeBeermoth. Thanks for having us. We talked mostly about our beers obviously; upcoming events and meetup ideas so we should have quite a summer lined up. There was quite a lot discussed before we started to crack open the large bottles @CafeBeermoth have available so I apologies for any inaccuracies or if I missed anything.

This month we welcomed Michael to the group. He found us by search Google for Manchester homebrew so its nice to see us topping the search. Hes got himself an all grain setup and brought along a vanilla hopfen weisse. A good beer with a big hit of clove flavours and the beer was fermented at 28c. He nicely let us polish off all 4 bottles. Cheers! We can't wait for the next beer.

We had a brain storming session and noted all of our upcoming events. Lets get brewing for them!

Beer Merchants are throwing a free entry warehouse party this weekend and have invited 13 breweries to setup their bars. A few breweries still to be announced but Beer Nouveau, ABC, Northern Monk, Four Pure, Track, Chorlton Brewing, Runaway, Lervig, Tiny Rebel, North Brewing and Hawkes will all be there. Promises to be a great event over at 102 North Western Street 12 til 9pm!

Steve the owner of @BeerNouveau(https://twitter.com/BeerNouveau) is going to host us at his brewery. On the day we will host a free bar which will be manned and supplied by us homebrewers. This is our opportunity for us to showcase just how good homebrew can be. In order for this to work we should look to deliver our beer to the brewery a week early, supply serving gas/equipment for any corny kegs and invite the other homebrew groups to attend. We plan to engage with the Chorlton, Macclesfield and Wigan groups to see if they are interested in helping out.

As part of the day we want to run a homebrew competition for the best truly commercially viable beer. As homebrewers we are not often bound by financial constraints on such a small scale so it will be a challenge.

The exact details of the day and competition have yet to be agreed but we will work with Steve to finalise the details and blog it out in the near future. Note this will more than likely replace our usual meetup in June.

The main theme of our meetup in July will be our BJCP IPA competition. The challenge is to brew an IPA which fits nicely into the BJCP IPA (US and speciality) 21 category. Rich will guide us through just how the national homebrew judges go about judging or beers. The beers will be judged by us using the BJCP guidelines. The idea behind this challenge is for us to learn what judges look for when judging our beers. Knowing this may help you brew your beers to the category you want or place you mishaps in a category the beer is best suited for. So get brewing your IPAs.

Full guidelines on BJCP category can be found on page 37 in this rather large PDF 2015 Guidelines Beer. Here's an extract of the category description:

The IPA category is for modern American IPAs and their derivatives. This does not imply that English IPAs aren’t proper IPAs or that there isn’t a relationship between them. This is simply a method of grouping similar styles for competition purposes. English IPAs are
grouped with other English-derived beers, and the stronger Double IPA is grouped with stronger American beers. The term “IPA” is
intentionally not spelled out as “India Pale Ale” since none of these beers historically went to India, and many aren’t pale. However,
the term IPA has come to be a balance-defined style in modern craft beer.

Brewcamp is a weekend long home brew meeting, somewhere in a field in the Peak District. Its likely to be in near Bakewell just like last year. The exact date has yet to be determined but it is likely to be either the second or third weekend in Aug. Its a good way to meetup homebrewers from further a field, the bar tent is stocked by ourselves and its even family friendly.

We plan on having an excursion out to Hudderfield to experience the beer scene there. More than likely we will meetup in Manchester and commute over on the train. It will be on either the 13th Aug or 20th Aug dependent on when Brewcamp is.

Last year was the first year of The Great Northwest Homebrew Competition. You can find a writeup of the event over at Mashtun And Meow Sheffield Beer Blog. We hope to organise the 2016 installment for October. With a bit of planning we might just pull this off!

Rich won the UK-EU stage and the world final to become the 2015 winner of @sjporr homebrew competition. His entry was a redcurrant saison and what a beer it was. Judged by homebrewers and organised by homebrewers. You can find details about the 2016 jsporr challenge on youtube and on sjporrchallenge.com.

Other Beers In Attendance

Manchester Home brewers Group - we brew beer at home and love it! Meetup every 3rd Sunday of the Month at 3pm in the @CafeBeermoth