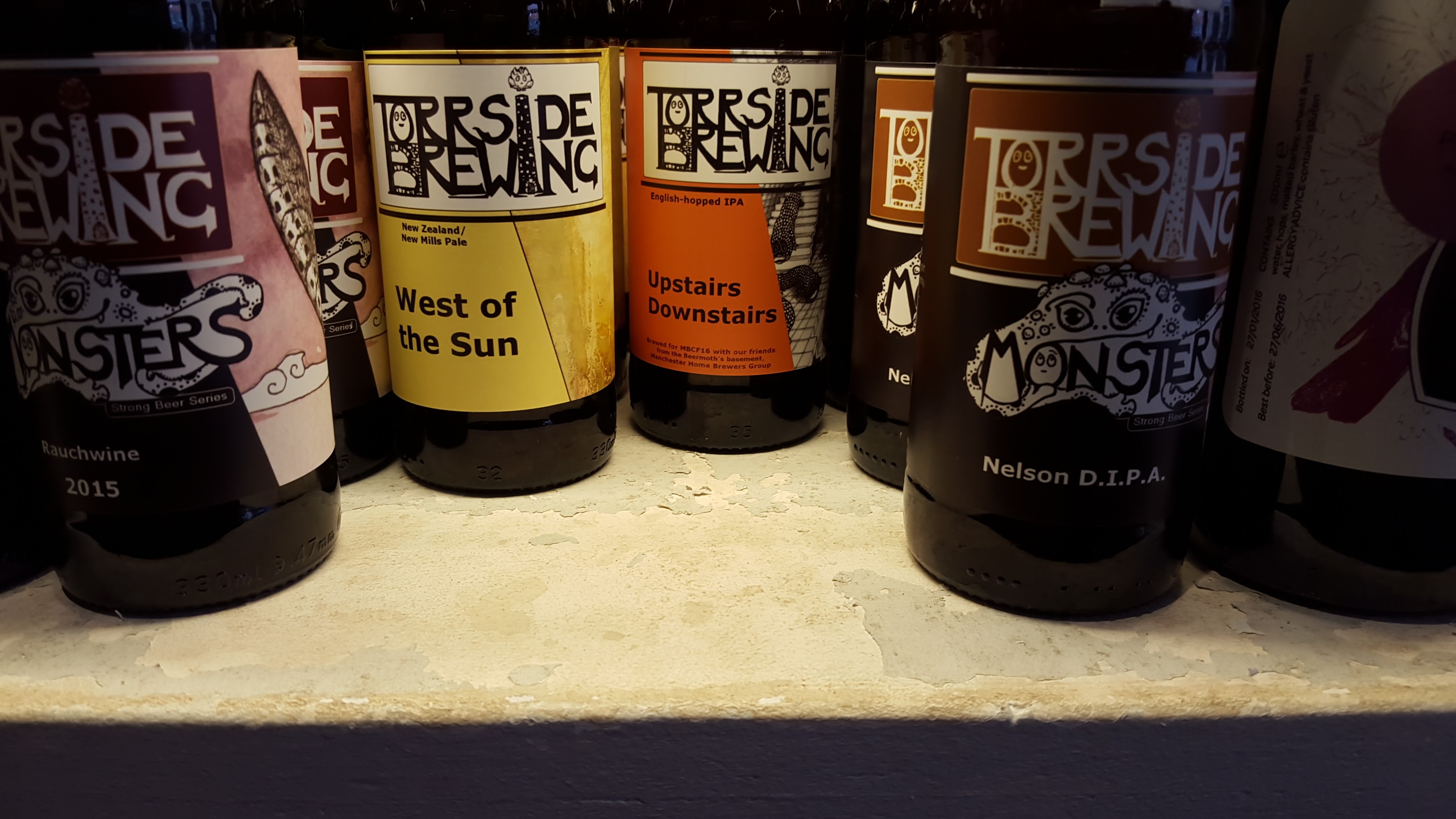 This month we were back in the basement at @TheBeermoth. In a nice turn of events the collaboration beer 'Upstairs Downstairs' we brewed with @Torrside was upstairs whilst we were in fact downstairs.

We welcomed a couple of new people to the group this month.

Aron who has just started his homebrewing hobby brought a couple of his beer using the Bulldog beer kits. Really good start to brewing, seems like hes caught the bug with plans for more homebrewing kit. This led a nice discussion about how kits have been improving over the years with some even introducing you to using the raw ingredients and offering the brewer the chance to experiment.

Stuart has been brewing for a little while now and brews plenty of 1 gallon batches. He brought us a medley of beers to try. What a beer list to bring to your first ever meetup. I guess 1 gallon batches offers plenty of room for experimentation.

Ollie joined us from @Carbon_Smith to discuss his crowd funding business plan. In a nut shell you or a group of you can hire time on one of three 60 liter brewing kits and a fermenter. This can either be a one off or a monthly subscription allowing either one or two mashes per month. He already has hop contracts in place for most of the hop varities we love. The information pack Ollie brought along is pretty detailed so we will do a dedicated post with the full details.

Congratulations to Richard(@rcaller) on winning the speciality category with a 14% barley wine. Although we are all not to sure how this could be brewed on scale and ready in time for June?

A special mention to Andrew(@brewingFortyOne) who came second in the same category with his Bière de Garde.

They both brought their beers to the meetup and were well received. Really deserved 1st and 2nd places.

Manchester Beer Week(@mcrbeerweek) is taking place June 10th - June 19th. During the week we are keen have some form of homebrew involvement. Plans are starting to be formed but it looks like we will be at Steve's brewery (@BeerNouveau) one of the days showcasing our beer. It might even be turned into a homebrew competition.

BJCP styles Richard(@rcaller) still wants to do a session on the categories and judging process. Unfortunately he hasn't had time of late but it could be the focus of one of our meetups in the future.

Manchester Vs Liverpool yeah we lost enough said. Not sure when the rematch is but it will be hosted by Mad Hatters in Liverpool. Perhaps the beer categories above should be used next time?

Hop shortages hitting homebrewers? Apparently even if homebrewers are willing to pay a premium for hops at times it can still be difficult to find certain hops such as Nelson. http://www.geterbrewed.com/ and Dean Reagler's (deanrpwaacs) ebay shop http://www.ebay.co.uk/sch/ramengltddean/m.html were both suggested as good trust worthy alternatives to the usual online shops if they are out of stock.

Cooling controllers most homebrewers will at some point look at building their own temperature controller using an STC1000. But a few of us have recently seen the arival of the 'Inkbird Digital Temperature Controller' on the market for a reasonable £40. A complete unit requiring no need for home electrics and much more capable than a standard STC1000. There are a few different versions but the 'Inkbird ITC-310T Programmable Outlet Thermostat' looks the most capable and can often be found on Amazon.

Other Beers In Attendance

Manchester Home brewers Group - we brew beer at home and love it! Meetup every 3rd Sunday of the Month at 3pm in the @CafeBeermoth