Today we have a guest blog post from Steve Hill about how a beer in a French town called Morzine turned into all grain brewing and the purchase of a new Bulldog Brewer system.

Earlier this year I travelled to a beautiful town, high in the French Alps, called Morzine. We’d been on a skiing holiday here a few years ago and enjoyed it so much, we decided to go back. It’s got a really good vibe about it and we’re at the age now where we prefer a nice meal to an all-night party, so the selection of restaurants and cosy bars really suited us.

One evening, on the way back from a fun day on the slopes, we stopped a pub called the Bec Jaune. As soon as we went through the door we knew it was the place for us. Four stainless steel fermenters on the back wall, in-house brewed real ales on tap, a great food menu and a big stack of board games to play. I opted for a pint of the Chinook IPA and I’m not sure whether it was the mountain air, or the fact that I really needed a drink, but it was one of the best pints I’ve ever tasted. 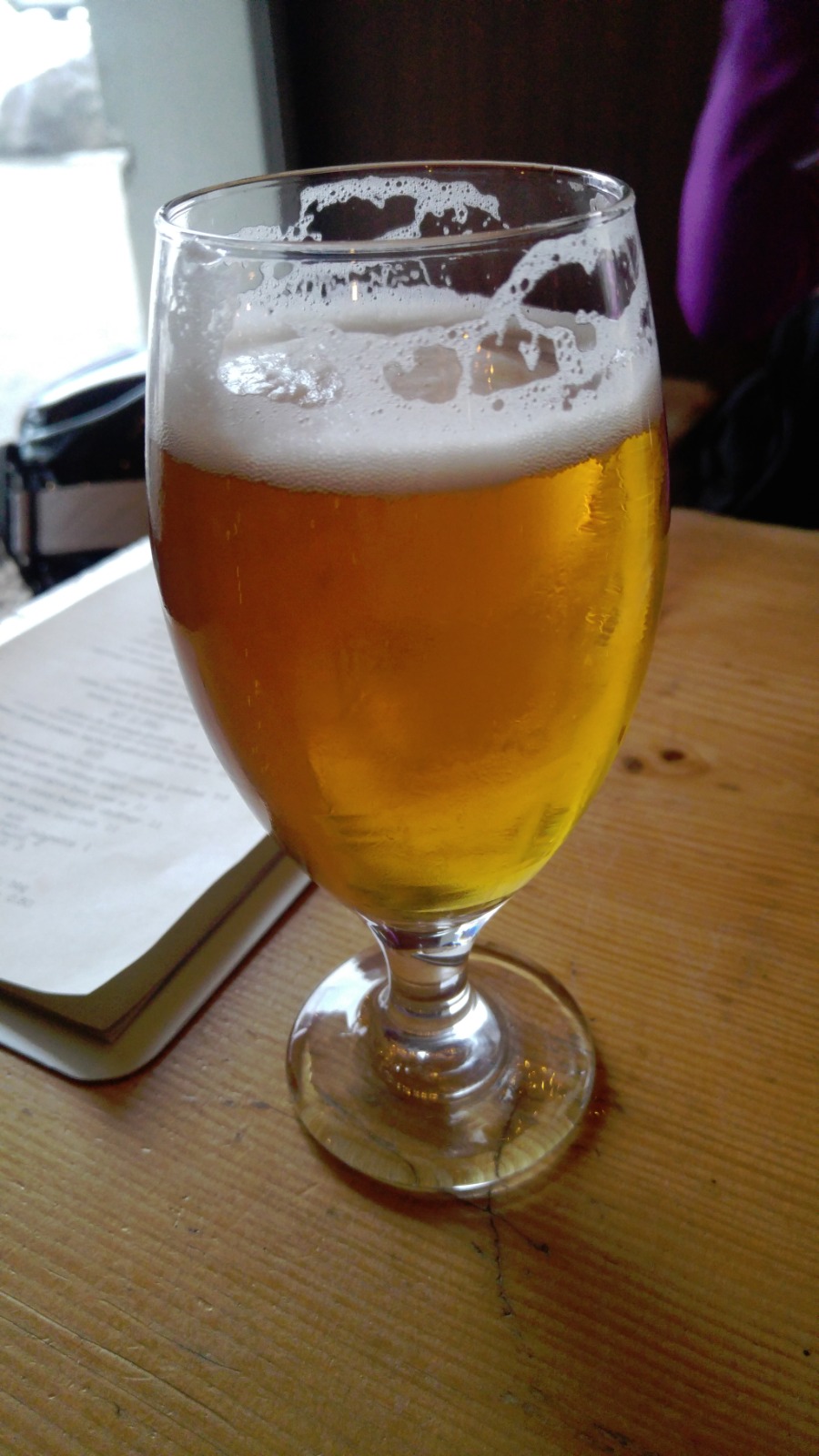 When I got home, the taste of that first pint really stuck with me. I dropped an email to the Bec Jaune to say how much I had enjoyed the beer and received a friendly reply from a guy called Nathan. I cheekily asked if he would mind sharing the recipe and he was kind enough to say yes. The first thing I did was forward it straight on to my mate Craig, who I brew on a regular basis with saying: “We gotta try this, it was awesome!”

Time for a New Brew System

I’ve been brewing for a number of years but the extract kits I’ve brewed, although good, have never quite reached the level that I was looking for. I’d brewed a couple of times on Craig’s all-grain kit and decided that it was about time to move up to the big league. The research started: stock pan, mash tun, wort chiller, tubing, etc. I started to wonder whether it would just save a load of time and effort to invest in an all-in-one brew system. I’d heard of the Braumeister in the past but, looking at prices, it was way over my budget. Reading up on alternatives, I found out about the Grainfather and Bulldog Brewer. Brand new, these were still over my budget, but I found a second hand Bulldog on eBay which was priced similarly to the DIY kit that I’d been pricing up. I was pretty much convinced that this was the way to go, so I started looking at reviews and found out that a new Bulldog Brewer was on the way. It was still over budget, but I watched a few reviews on youtube and gradually convinced myself that it was worth the extra money. I found a supplier online who took pre-orders and took the plunge. New brew rig purchased, I felt like a kid on the way to Disneyland! 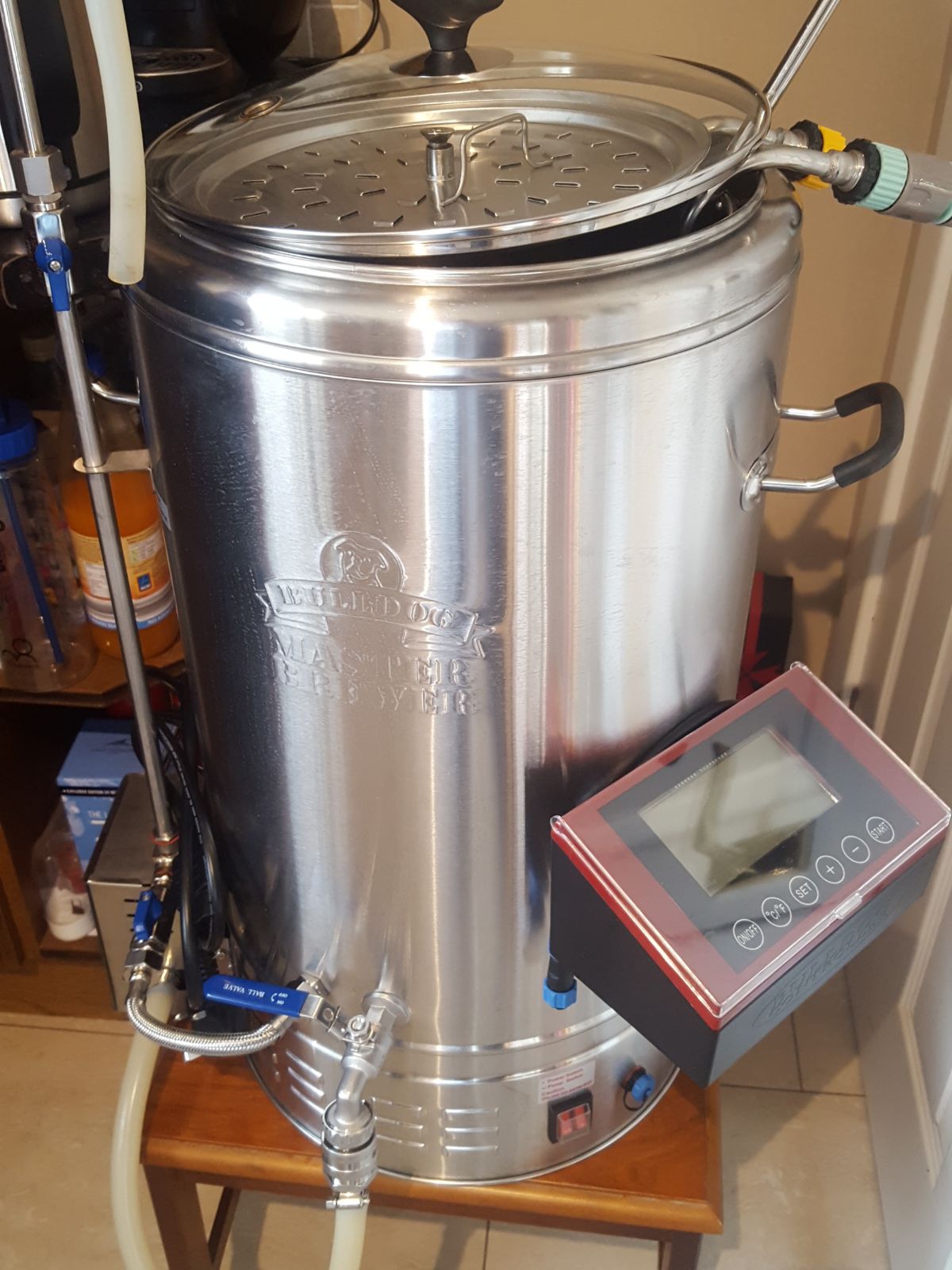 Before brew day I decided to turn my old extract pan into a sparge water heater. I found a cheap ball-valve tap on eBay, some silicone tubing to match, plus a ½ inch quick disconnect that would connect to the input on the master brewer pump line. Rather than messing around with it all, I decided to wait until the next brew day to get some help from Craig, who had previously installed a similar tap on his kit.

When brew day arrived, to save time, we decided to fit the tap during the initial heating/mash. Nothing like adding more pressure to the proceedings while learning a new brew system! Craig had brought a hole saw which he had used on his stock pan. We drilled a pilot hole and went for it. The drill seemed to be generating plenty of heat, but not much else, so we stopped to check what was going on - disaster! The teeth on the saw had melted off - time for a new plan of action. I drew around the inside of the washer that fit on the tap. Then drilled small holes around the edge. Using a dremel, I then cut between all the holes to remove most of the metal, then filed it out to the line using a sanding wheel. Result! The tap was a perfect fit. 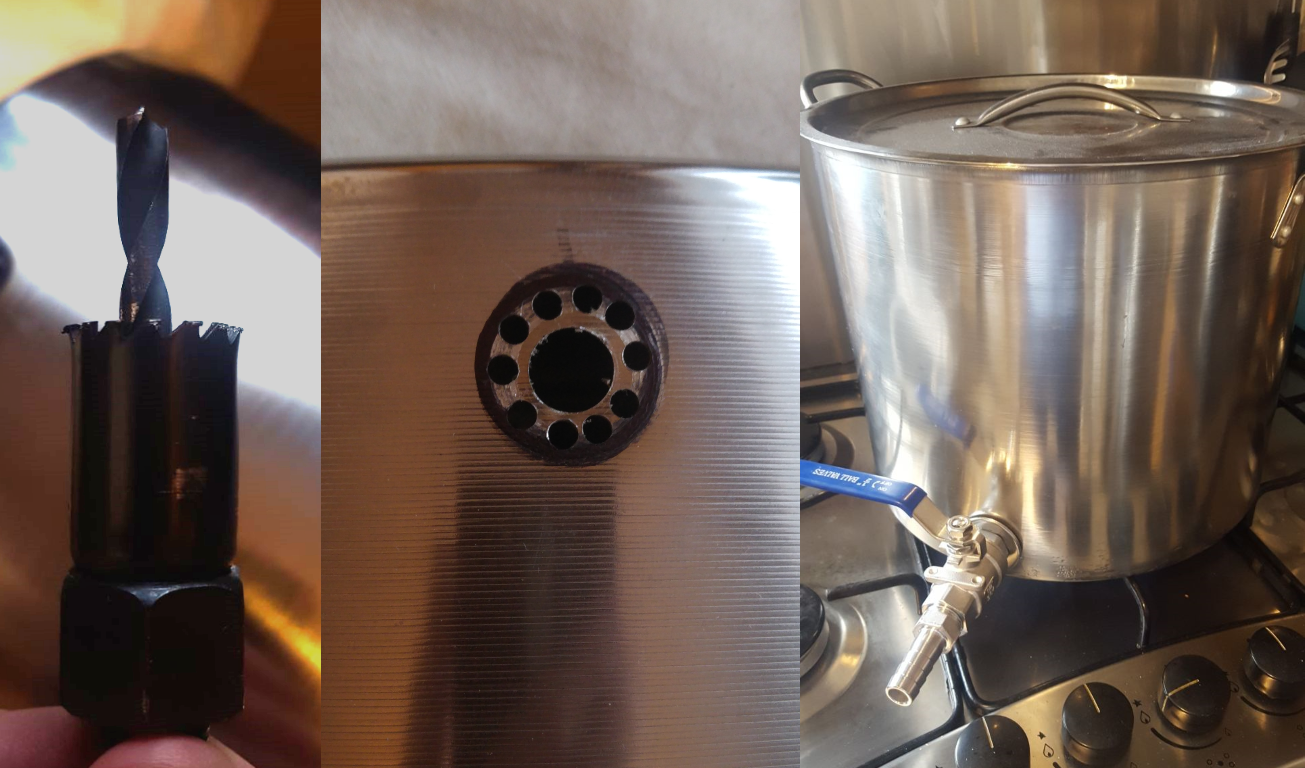 By this point, it was time to mash in. Mid way through the mash, the tube in the middle of the grain basket came loose - nightmare! I thought that maybe it had unscrewed itself, so we decided to pull the basket out, let it drain and then see if we could get it to screw back in from underneath. On closer inspection, the press fitting of the collar had popped clean out of the metal plate. There wasn’t much we could do about that with a basket full of grain, so we put everything back in the boiler and gave the partially hydrated grain a good stir to loosen everything up again.

Once the mash was complete, we lifted the basket and let it drain. We connected up the converted sparge pan and pumped the hot water in to the top. It was quite hard to see the markings on the inside of the boiler with the grain basket perched on top, so we used an online calculator to figure out how much liquid the grain would likely have absorbed. With this being a new system we weren’t certain of the boil off rate, so we went with a low estimate because we could always top up with boiling water later. Thankfully the new sparge pan worked like a dream with no leaks. The pump was a little bit quick pumping the water in so I decided that next time I would slow down the flow using the adjustment on the recirculation line.

We brought the wort up to a rolling boil and went in with the starting hops. I’d read that it was best to use a hop spider to avoid clogging the filter / pump. I didn’t have one of these so I used a grain bag that I’d previously bought for doing partial mashes on my extract kit. I picked up the dish with the hops in and realised that I’d forgotten to sort the bag out. I put the hops down, got the bag out of the cupboard and stretched it over the boiler, then picked up the hops and tipped them in. When I went to put the bowl down, I noticed a problem:

Yeah, in the process of sorting the bag out, I’d added the aroma hops rather than the bittering hops…
The hops were similar but the amounts were miles off, so we checked the IBU using an online calculator and adjusted the remaining hop additions. Essentially we just took out the middle hop addition, and a small amount of the aroma hops. The recipe required dry hopping the bulk of the hops anyway, so hopefully a small loss during the boil wouldn’t be a massive issue.

We decided to recirculate during the boil, to make sure the maximum amount of flavour was extracted from the hops. After about half an hour we noticed that the pump was struggling a bit so we had to turn it off. This turned out to be due to the bazooka filter getting blocked up with trub. I suspect this was worsened due to the tube in the grain basket coming out during the mash. In future I will probably take it out and give it a clean following the mash, before bringing everything up to the boil. Although, I’ve also heard of other people running the system with the bazooka filter removed completely and then giving everything a thorough clean afterwards.

When the boil was complete, we connected up the wort chiller and dropped the temp down to 20c for pitching. A good tip here is to save the cooling water in a spare bucket and use it for cleaning up afterwards. Shame to run it all down the drain when you can make use of it. 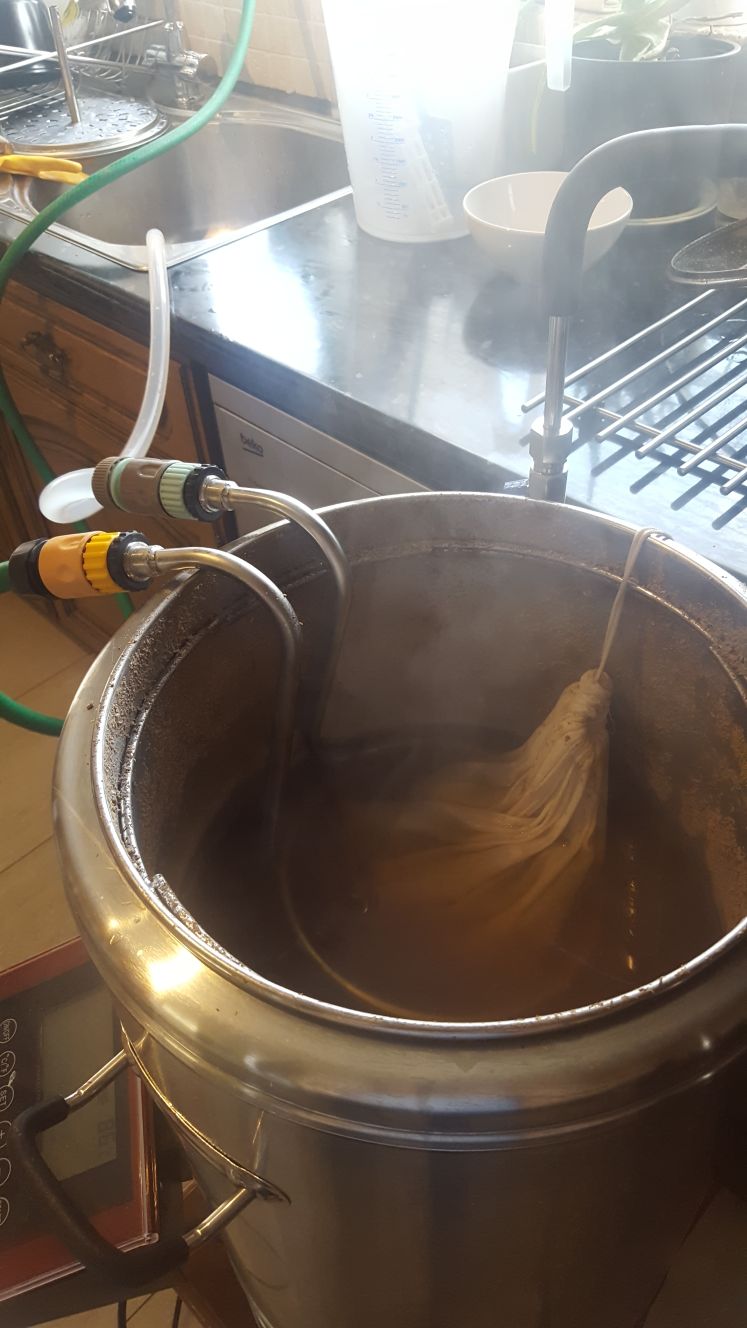 The wort was transferred to a fermentor, and fermented for 5 days at 20c. At this point the remaining chinook hops were bagged up and dropped in. Another three days in the fermentor before cold crashing for 24 hours and then transferring to a corny keg.

Thankfully, despite a few issues on brew day, everything seems to have turned out ok. Lots to learn but I’m really impressed with the Bulldog system so far and I think it’s been a worthwhile purchase.

Our brew house efficiency wasn’t that great and fermentation finished a little higher than expected on the FG but the final beer has still worked out at a nice 5.6% ABV.

The initial taste of the beer is really good and definitely reminds me of that first pint in the Bec Jaune. It’s awesome to be able to recreate some of that mountain magic back home, here, in a small town near Bury.

https://www.youtube.com/watch?v=ZtJZdKpHC7I - Blundering Brewer - Brewday #1 with the ALL NEW Bulldog Master Brewer plus summarised thoughts on the system!!