Yep. You read that right. In June 2017 Manchester Homebrew held a "Will It Brew?" challange. Everybody wishing to take part was asked to bring along a weird ingredient. It had to be something you wouldn't normally find in beer. It couldn't be poisonous to humans or yeast. And if it was an animal product Steve couldn't brew with it. His brewery, Beer Nouveau, is vegan and he didn't want to contaminate his kit. Though he has since brewed a Cock Ale with chicken and a recreation of Mercer's Meat Stout with beef stock. So I don't think we'll let him use that excuse again.

Each ingredient was given a number. The numbers went in a bag. One by one we drew numbers. Treacle. Mushrooms. Burdock root. All interesting but almost certainly brewable. What we got, on the other hand... Lucy and I pulled dried blood out of the hat. The kind you'd make black pudding with. Rich has been thinking about making blood beer for some Halloween fun for a while. Someone at the meetup had a vague memory of seeing something online about a brewery creating a beer with blood. Ok. So maybe it was possible. Maybe. But how???

When we got home, I had a look online. Blood orange pollutes your results if you search for "blood beer". There are a couple of threads on HomeBrewTalk where people muse about how aweful a beer with actual blood in it would be but nobody actually having a go. I did find one American brewery that had made a beer with blood, though I can't for the life of me find them now I come to write this! The page on their website had little info other than that it was a Halloween special made with blood. Essentially, looking online was getting me nowhere so we'd have to be a little more experimental.

Like any homebrewers with an ebay account, we own several conical flasks and a stir plate. We always make yeast starters and we've started to use forced ferment tests a part of our routine. We figured if we used a similar technique, we could observe the effect of re-hydrated blood on yeast. Would it kill the yeast? Would there be fermentables in the blood that the yeast could actually metabolise? There was only one way to find out. We re-hydrated some dried blood in a conical flask and started heating it up on the hob to sanitise it. That was a really bad idea... It turns out that if you heat up a blood solution you don't get a sanitary blood solution. You get a clot. A BIG clot. 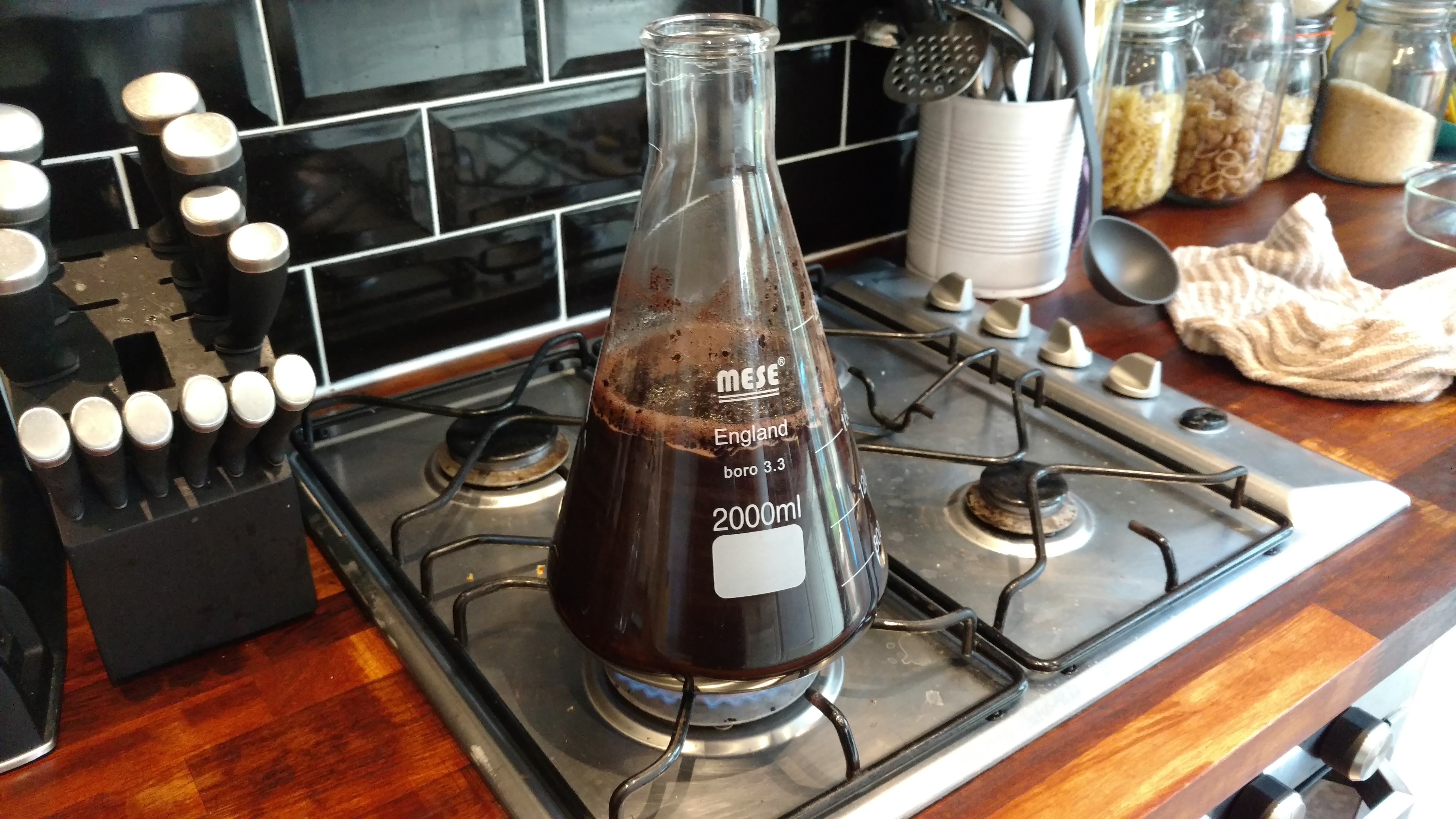 Well that didn't go well. I did what many brewers do and tasted my ingredients. Dried blood powder doesn't taste of a whole lot. Mainly like dust. Re-hydrated blood on the other hand... I can't recommend it. It doesn't taste bad as such, but the smell and taste seemed to tap into some primitive response to gag. It's not great. And even worse, it was awful to clean off of our conical. In the end, we resorted to a little vanish oxy-action which reacted with the blood and lifted it from the glass. Interestingly, it didn't dissolve the blood as such but turned it a sort of semi-transparent pale yellow and softened it. This makes sense when you think about it. You might not be able to get all of the blood out of the fibres on your clothes so bleaching whatever is left is good enough. Anyway. I digress. Our test was a failure. We didn't know any more about how the yeast would react to the blood so we'd be flying blind in that regard on brew day. And while we now had a sense of how the blood tasted, it wasn't good. But it did give us a sense of how much we would need to dilute the blood to get something drinkable. And we now knew that just chucking the dried blood into the boil wasn't going to work. It'd likely just end up as one big lump floating around in our boil pot. But it occurred to me that how the blood behaved was very similar to cornflour when you add it to hot water. Maybe we could treat the blood like cornflour in gravy. Mix it thoroughly with cold water and add it slowly while stirring. Maybe our test wasn't a complete failure after all.

Now came the question of what recipe to brew. We had been thinking of a smoked porter since we were handed the ingredient. A simple smoked porter would allow us to identify the blood amongst the other flavours. And at worst, we might end up with something that tasted like a smoked sausage. But the quantity of blood that would work best was still an unknown. Our solution was to split the batch. One batch would be a plain smoked porter. This would be the control and allow us to taste the effect the blood had on the beer. We would then make a demi-john with a lower proportion of blood an a dami-john with a higher proportion. The blood would go in after flame-out. We would add the rehydrated blood slowly into the still hot wort to sanitise it. This meant that we wouldn't be able to chill the wort in the boil pot with our immersian chiller as we would normally. If we just left the beer to cool in the carboy and demi-johns, that would mean handling hot glass and no cold break. So I'm sure you can all appreciate that I was left with no option other than to buy a plate chiller capable of going from boiling hot boil pot to room temperature fermenter in a single pass. We would transfer ~11L of the plain beer to a small carboy. We would then add the quantity of blood for the lower concentration batch to the remaining half of the beer in the boil pot. We'd transfer half of that. Finally we would add more blood to the remaining quarter-batch in the boil pot to make up the higher concentration and transfer that.

So that was the plan. And it worked out pretty well. Here's the recipe we ended up using:
Batch size: 21L 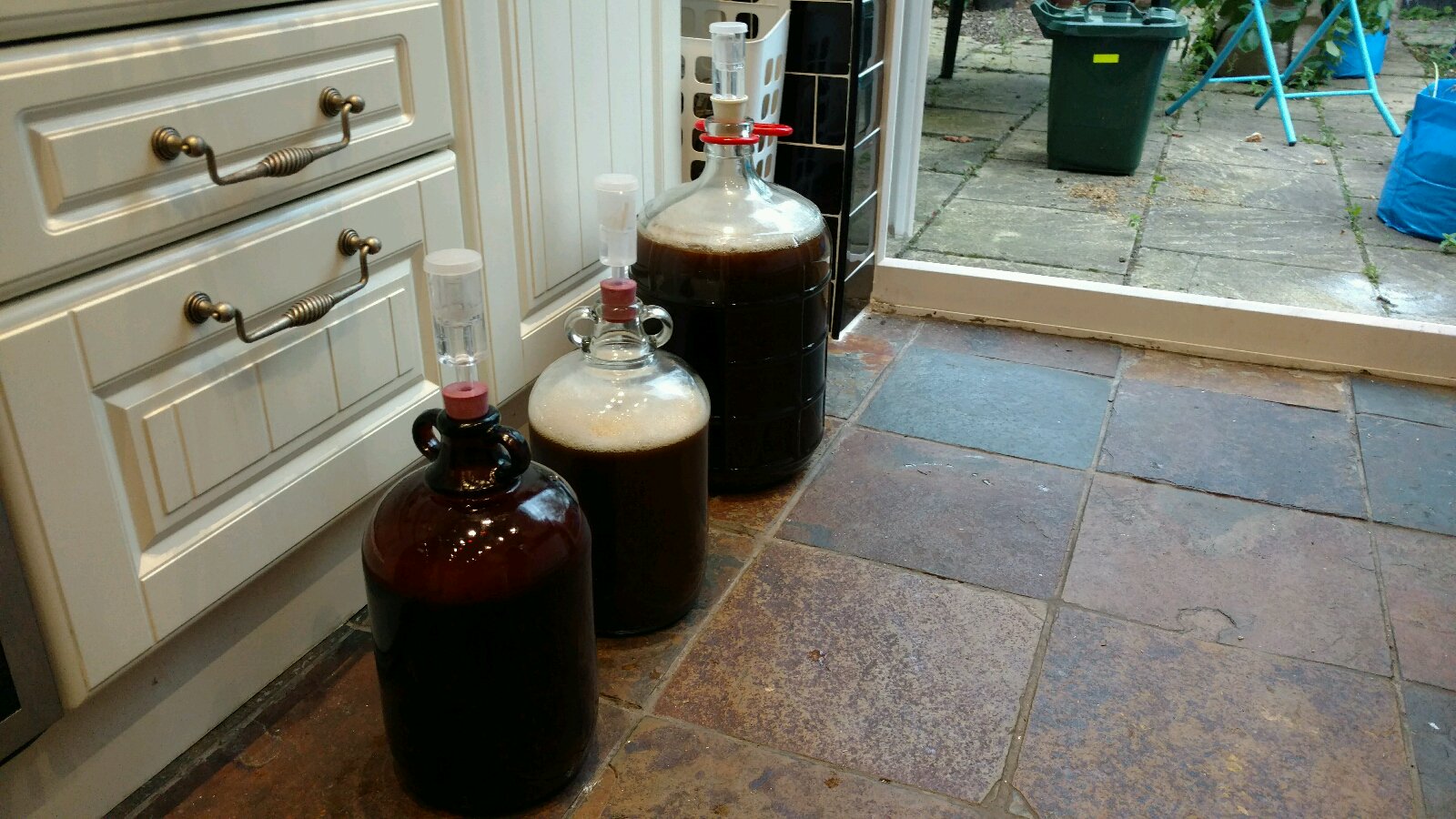 We didn't have enough temperature control to manage 3 fermentors and our temperature controlled fridge was in use for a Westvleteren 12 clone. So all 3 fermentors went in the basement which is a fairly steady 19°C in the summer. All 3 fermented down to about the same FG of about 1.022 in about the same time. The only observation we made about fermentation is that some of the blood seemed to settle out on the bottom of the fermentors. This might just have been the yeast though. We made one yeast starter for the lot and guessed the ratios when pitching.

We had a taste when bottling. The base beer was good. A little sharp but then we didn't use water additions to buffer the dark/smoked malts. The low concentration of blood was interesting. A little thicker in the mouth feel with a distinct taste. But if we didn't know there was blood there, we wouldn't have guessed. The higher concentration had a slight metallic taste that was bordering on a bit too much. 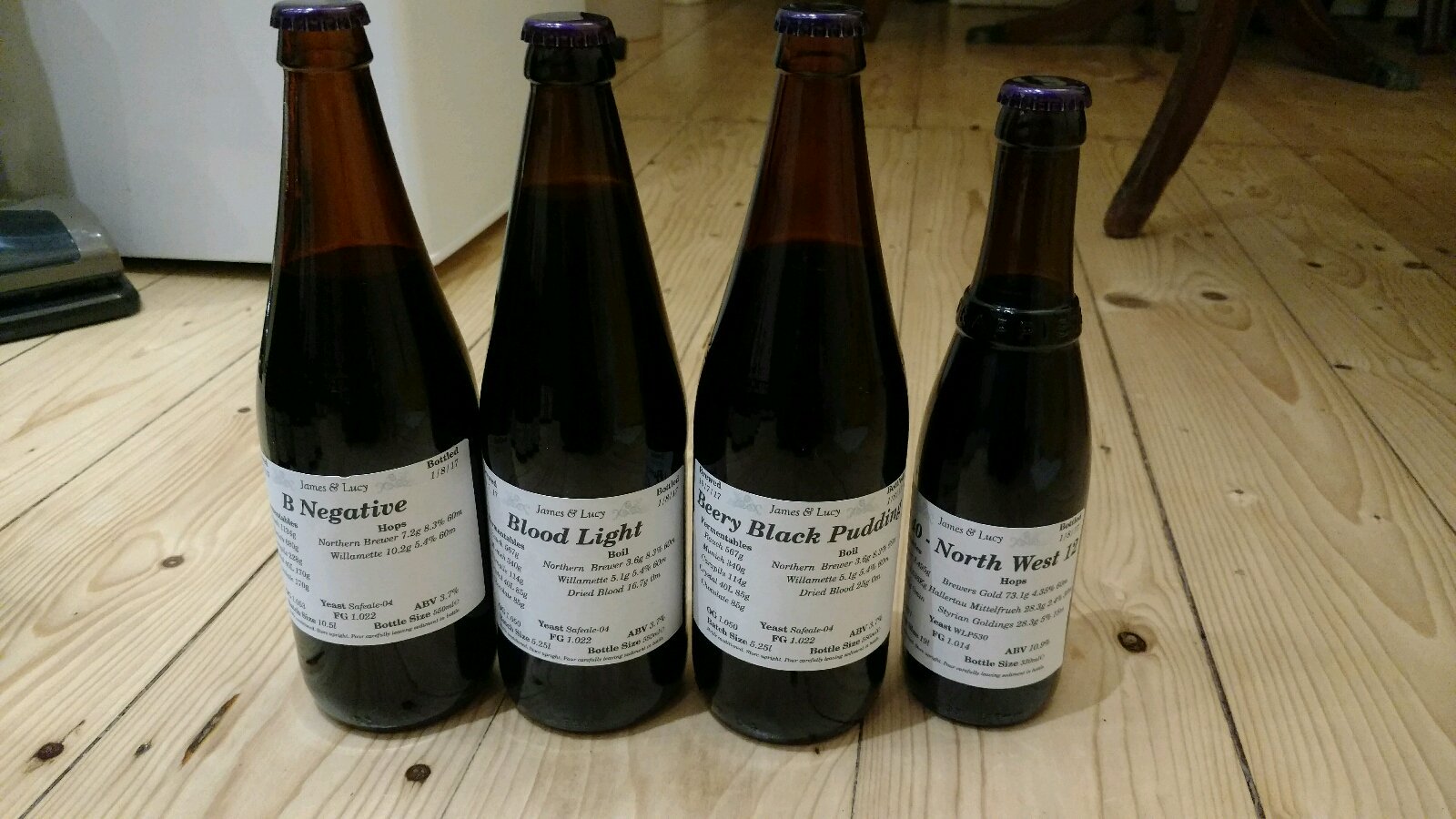 And finally, to the homebrew meetup that concluded the will it brew challenge. We hadn't tasted the beer since it had gone in the bottle because it wasn't one we felt any particular desire to reach for after work when we fancied a beer. It went down surprisingly well. The blood taste had pretty much gone. The main difference in the bottle is that the higher the concentration of blood, the less smokey the beer tasted. People certainly agreed it was less bad than they expected. To be honest, it was a bit of a disappointment that the effect of the blood on the flavour of the beer was to remove some of the flavour. More recently, we took the beers along to Beer Nouveau's Weird Is My Happy Place event. After a little ageing, the blood beers seemed slightly thicker in mouth texture and less sharp in taste than the base beer. In the image below you can see our Beery Black Pudding on the left, Beer Nouveau's Meat Stout in the middle, and Beer Nouveau's Cock Ale on the right. 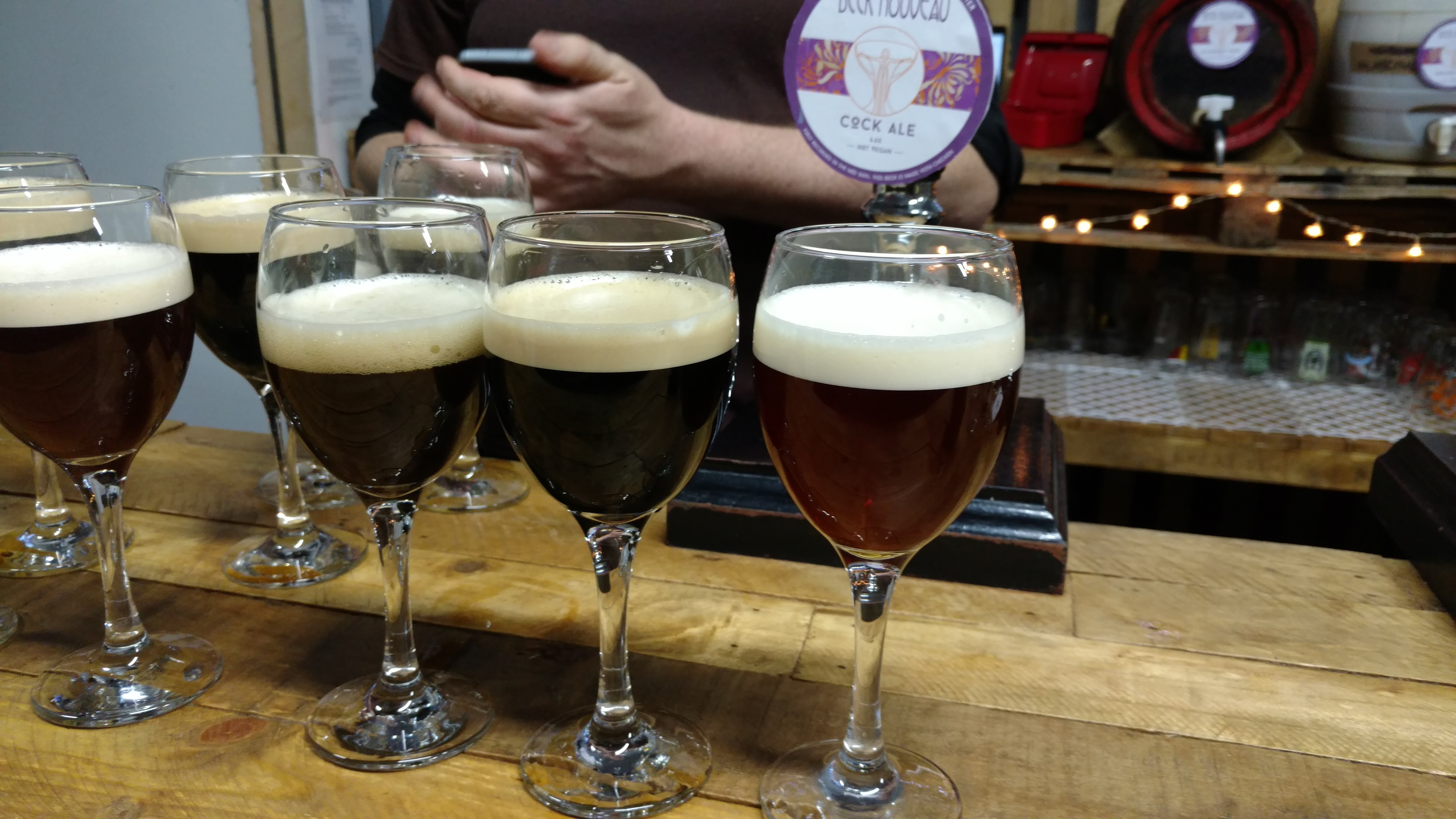 So can you brew with blood? Yes. Should you? Its honestly not worth it other than as a gimmick. It doesn't add a whole lot to the beer and what it does add, you can get by adjusting the other components of your recipe. But if you decide to stick your teeth into the challenge, hopefully you've gained a few tips here.